In the summer of 2010, business, education and community leaders in Pittsburg identified a need for a grassroots, citizen-driven visioning effort to strategically address the community’s opportunities and challenges. Similar efforts in the past have proven fruitful, resulting in successful local initiatives to build the Family Resource Center and groundbreaking collaborations like the Business Education Alliance.

A steering committee of fifteen local representatives from a wide variety of backgrounds was formed to lead the visioning effort. Pittsburg City Commissioner Marty Beezley and Dr. Brad Hodson were chosen to serve as co-chairs of the vision steering committee. As part of the information gathering process, this steering committee engaged The Bernard Consulting Group, a Kansas City-based consulting firm regarded as one of the nation’s foremost experts in community visioning. To maximize community input, the steering committee and The Bernard Group conducted three town hall meetings, two online surveys and an identical hard copy survey mailed to all Pittsburg residents with a pre-addressed, postage-paid envelope for return. The Bernard Group also conducted one-on-one interviews and thirteen focus groups with various targeted audiences from the community.
From this input emerged a common vision, along with four specific core areas of focus: Housing, Economic Development, Infrastructure and Public Wellness. In addition, a list of strategies with specific goals were identified for each area. These goals would serve as the action plan to support Imagine Pittsburg.

From 2012-2017, Pittsburg experienced approximately $300 million in planned or completed projects. Many of these were a direct result of community input received through the Imagine Pittsburg planning process.

Individual task forces comprised of steering committee and community members updated each of the four areas of focus, as well as two new ones, education and marketing/branding. The task force members reviewed progress made on each of the initial Imagine Pittsburg 2030 priorities and recommended revisions back to the steering committee. They also looked forward to identify the next list of strategies and goals needed to continue the momentum for the next five years. This work spanned several months and periodically the subcommittees reported back to the larger committee as they completed their individual plans. Information received from numerous studies were available to assist in the goal setting process. These studies included:

Several of these reports included significant citizen engagement which makes it important that the information is included in the plan going forward. Receiving input from the citizens was a core component of the original Imagine Pittsburg initiative and it is critical that it remains a centerpiece of the continuing effort. 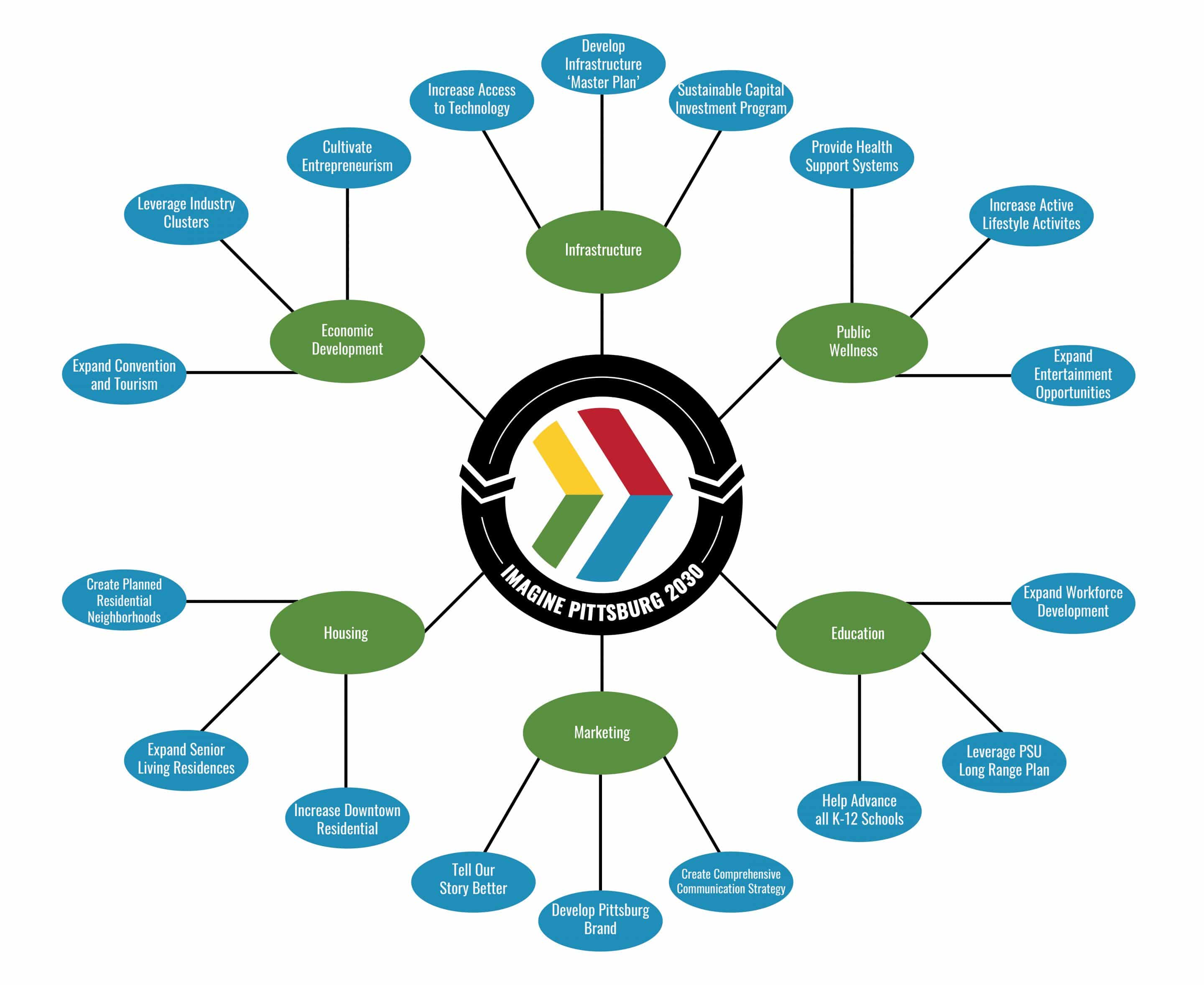 The importance of housing cannot be overestimated. The primary measurement of growth is population. With over half of its housing stock over fifty years old and an average listing price of $85,000, Pittsburg does not represent an attractive housing market. In Pittsburg, 27% of the houses were built before 1939 and 28% were built between 1940 and 1970, making over half the housing stock approximately 50 years or older.

A recent comprehensive housing study indicates housing needs across the entire spectrum including affordable, senior, moderate income, multi-family, and higher-end market rate, with an emphasis on the need for moderate to higher income houses in specific locations. Current estimates indicate over 400 acres of developable land within the city limits.

The engine driving vital communities is business. Communities that support economic activity are better able to sustain a successful population and increase community wealth.
Pittsburg will be an environment that encourages entrepreneurial activity, supports business and creates jobs. Pittsburg will actively work to attract and retain a skilled workforce to meet the needs of its growing businesses. It will better leverage university talents and resources directed to support targeted industry clusters, and it will enrich its quality of place by focusing on improved cultural and physical amenities.

Attract and Retain a Skilled Workforce

The health and safety of the people in Pittsburg is essential to maintaining a vibrant and growing community. The citizens of Pittsburg have approved additional police officers and public safety equipment and technology and have invested in their physical security. The next step is to improve their overall health and increase activity levels. In addition to improving our services for the underserved and those struggling with their individual health, Pittsburg will create a built environment that encourages alternatives to automobiles and provides essential services for all of its citizens. Finally, by leveraging our current entertainment venues Pittsburg will position itself to become a regional destination for people to gather.

Become Entertainment Capital of the Region

A strong infrastructure is a vital component of any community and Pittsburg’s continued investment in this area will provide opportunities to both business and individuals alike. Huge advances have already taken place in the technology sector and as a community comprehensive master plan is completed further investments in our infrastructure will be identified and addressed.
These plans and the related projects will be critical as Pittsburg continues to attract new residents and business. Traffic flows and alternative transportation methods are a necessary part of having a friendly, livable community.

Advance Technological Systems within the Community

A key component for any great community is a commitment to education. Pittsburg is fortunate to have an education system that not only provides quality at all levels, from Pre-K through 12 learning, but also a four-year University and a regional technical education center.

Education opportunities for everyone in our community, regardless of their individual needs will continue to attract industry, families and entrepreneurs. By partnering with our education institutions Pittsburg will prepare a workforce that is ready for any challenge, and provides a fun and exciting environment for those who are choosing a place to live and raise their kids.

Advance all Pre-K through 12 schools

As Imagine Pittsburg continues, the number of successes achieved by our businesses, institutions and citizens grows. Telling the story of how we are doing is an important part of this process. Communities constantly compete with one another. One of the simplest ways to effectively tell our story is to make a concerted effort to market our progress and specifically our successes.
While the initial Imagine Pittsburg initiative was largely a plan, the latest version includes not only a plan forward, but a summary of achievements and progress. The understanding that celebrating our successes with those outside our community is critical to growing Pittsburg will help us as we move Forward Together.